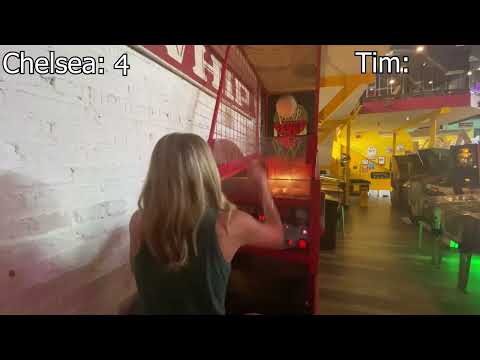 It's March meaning it's the heart of basketball season! Tim and Chelsea compete against each other in Pop-A-Shot. Tim vs Chelsea: Say What?!

Say what?! It's all about lip reading in this latest episode of Tim vs Chelsea!

Tim vs Chelsea: The Fair The 2022 Susan G. Komen More Than Pink Walk is Saturday, January 29th!  This year’s event is hybrid – You can walk in-person at Meyer Amphitheater or virtually from wherever...

Merry Christmas New Country 103.1 fam. As our gift to you here is the blooper reel from Tim vs Chelsea: The Spelling Bee. Enjoy! Tim arrives to New Country 103-1 WIRK from Seattle, WA, where he was doing mornings on Hubbard Radio sister station KNUC-98-7 The Bull/Seattle.

Tim is also a stand-up comedian, performing for hundreds of clubs, colleges and corporations. His credits include being a regular for Catch A Rising Star clubs, along with appearances at The Comedy Connection in Boston, Zanies and The Improv in Chicago, and The Comedy Store and Laugh Factory in Los Angeles.

While in Los Angeles, Tim was a writer/performer with Warner Bros. Studios, Cartoon Network, and FOX. Tim is the co-creator and writer of several award winning TV pilots.

Tim has been happily married to his wife Karen for 22 years (although if you ask her she would say that it seem like much, much longer…) they have two kids; son Jonah (13), and a daughter Shawnessy Lynn (12…going on 27…). Born and raised in Vero Beach, Chelsea loves the outdoors and the beach, whether diving, paddle boarding, or just hanging out.

This South Florida girl loves to bike, spin, stay fit, and pursue happiness with her friends and through her varied experiences. Chelsea made a smart move finding a partner in life, Bo, that has a direct connection to one of her favorite things…booze.

Together they enjoy life and are blessed with three adorable children: Cayden, Bridge and the latest addition Baby Vail!